This year, my family had the opportunity to do something we’ve wanted to do for a long time – educate at home.  No matter how excited or prepared you are, it is still a nerve wracking decision.  I worried “am I doing the best thing for my child, will she stay on par with her school attending peers, or worse fall behind, will she miss out on opportunities or experiences?”

I still don’t know the answer to all of these questions, but I do know that I find myself frequently amazed as we travel this homeschool journey.  My daughter has taken such initiative in her education, and her creativity has no limits.

Our focus of study for October was not surprisingly centered on Halloween.  We delved in by learning about similar celebrations from around the world, and incorporated some of their traditions into our own celebration, such as the carving of punkies.  This was a tradition of children in some England villages, they would carve beetroots, put a candle in them, and carry them while singing a song and asking for money.  My daughter had so much fun carving beetroots, and wanted to go asking for money.  Unfortunately, Mom wouldn’t let her solicit the neighbors for cash.

Not only did we learn many global traditions, we practiced our own customs with a Halloween party.  My daughter planned and implemented a Halloween party for her friends and their families.  She made a guest list and a healthy menu, designed and created activities and crafts, decorated, and even made her costume.

The menu included items such as:

Goblin Toes (akin to pigs in a blanket),

Monster Fortunes.  As guests came through the door, they were greeted by a crystal ball, and were given their Monster Fortune, all of which were created and handwritten by my daughter.

Kiss the Pumpkin game similar to Pin the Tail on the Donkey, but she created lips to stick to a hanging Jack O’ Lantern.

She made Halloween color by number sheets,

and for a craft, make your own monster mask.

I must say, the party was a big hit.  All of her friends, and their families had so much fun, and really appreciated all of her effort.  I was astounded with her originality, and planning.  Not bad for 3rd grade school work, and don’t worry we still covered Halloween math and reading. 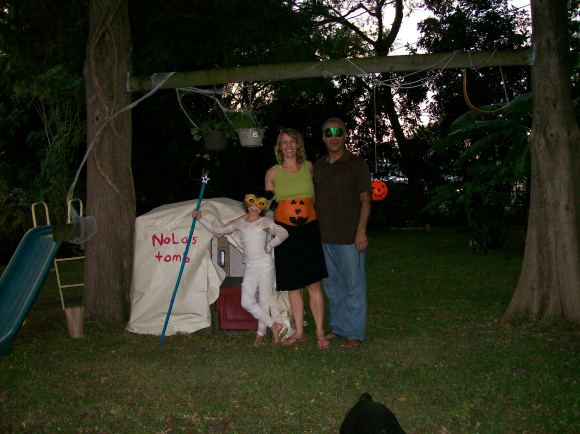 I must admit that over the summer my kitchen seems to repel me out every time I even think of going to create a nice family meal.  The Florida summer heat does not leave me craving time over the stove, much less, frequent hot meals.  However, fall has subtly crept in, as it does here, and I am living in the kitchen.  New vegetables are in season, which has me working like a mad scientist in the kitchen/ lab creating new inventions.

For this you will need:

salt and pepper to taste

How to put it together:

The benefit of sauteing the ingredients separately before baking them is to even their cooking time once they enter the oven.  This prevents having hard sweet potatoes with mushy pears.

This recipe was an enormous hit with my family.  We enjoyed it as a side to a vegetable omelet.  I apologize for not being able to post a picture, but it was gobbled up before I even had a chance to pull out the camera.

I am finally inserting myself into the world as a Health Coach.  Previously, I worked with people with various abilities to achieve independence.  However, health and wellness have been a passion for me for a very long time.  Now, I have combined those skills and passions to assist people to achieve their goals pleasurably.

Changing my path at this juncture in my life has required a lot of self-reflection and fear confrontation, which I continue to work on everyday, but it only makes me stronger.  I am so excited to be able to help others with similar challenges, and to share my experiences along the way.

Category: Uncategorized
Get your free meditation and the tools to create and achieve your goals

A Clarity Huddle is a personalized call with me to answer any questions you may have or figure out what your next step is towards your Health & Harmony. It’s a no cost, no pressure individualized session.